Off to dancing class first.

I was a bit late off the mark this morning. Honest, it wasn’t a Freudian slip, it was just a touch of brain fade, but by cutting a few corners we did get on the road about ten minutes late. Just as we were driving past the Irn Bru factory we chanced to see some head case in a bright yellow car testing his vehicle’s 0-60 capabilities. Usually this is done of a perfectly straight and level piece of track, like a runway or something similar, not on a fairly busy ring road with a bend about 50m from his starting point. Also the greater than normal chance of HGVs crossing the road just past that bend. I pity the folk who will eventually have to scrape him off a lamp post. We drove sedately on.

Arrived with about five minutes to spare. Today we were tackling Tango and I was given a reminder of one of the finer points of the man’s part, the pull back on the leading foot after the first three forward steps < that’s my reminder to me. It doesn’t have to mean anything to you.> With that fixed we got a thumbs up! We must have spent almost an hour on the tango, I didn’t check. Next was a sequence dance that we’ve done many times, but which I still occasionally get wrong, the Mayfair Quickstep. We did the Bellisima Cha-Cha after that. I think we’re both fairly ok with it now. After that we went on to a real Quickstep. We haven’t done the quickstep with Stewart and Jane, but we did eventually get the first set of steps right. It will need some practise at home to hammer it into my head, but we should have it by next week. Another couple of sequence dances later and we were done. My little head was full.

We’d planned on going to Irvine if the weather was fairly decent after the class and although the little patches of sun that had appeared in the morning had disappeared to be replaced with milky white cloud, we did continue down through long convoluted road the sat nav picked for us and ended up at the seafront at Irvine. We parked near a little trailer selling New Mexican food. I had a beef taco and Scamp had a chicken one with a couple of coffees. The food was lovely. We both really did enjoy it. After that, it was coats on and a walk down to the pier. I took some photos of the bridge to nowhere. It’s a steel bridge with hand burned steel panels on the side depicting different inventors who originated from Scotland. It used to lead across the estuary to an island with a kind of Science Centre on it, partly buried in a man made hill. The bridge had a removable middle section to allow yachts to sail through, but now that removal has become permanent and the science centre has closed. Such a pity. Such short sightedness on the part of the councils. We saw a family walking a strange looking dog. I thought it was a Borzoi, but Mr Google says it could have been a Saluki. It was the shape of a greyhound with long hair and had a tail that looked like a fan. Strange looking beast.

I got PoD on the walk to the pier. It was a view of some folk walking out to the end of the pier with that grey sky above. Quite gloomy. We drove home by a different route, one that I knew and not the twisty turny routes the sat nav prefers. I must check the preferences on that device to see if I’ve set a flag for “Choose the most awkward route.” 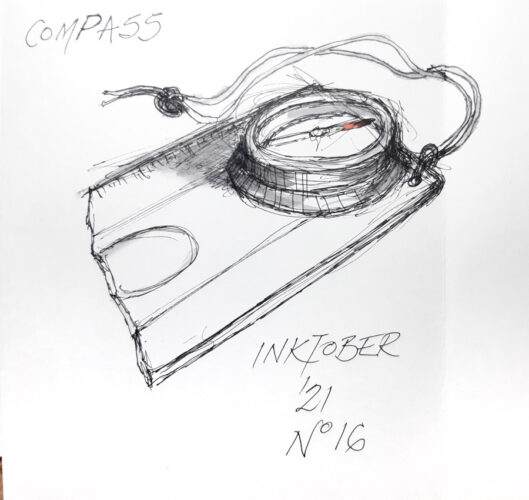 Today’s sketch prompt was Compass. I drew my old Silva compass which is about fifty years old and although the clear perspex base is broken, the compass works perfectly. It’s little used now that Google Maps and OS maps online make instruments like this almost obsolete. However, it does not need batteries, nor does it lose its signal, so still useful as a backup.

When we were driving home the rain came on, gentle rain, that started off as a drizzle but was getting heavier all the time. Now, at just after 11.30pm it’s raining properly, and has been for a while.

Tomorrow we may go for a walk if it’s dry, and if it’s not, there are lots of things to do at home.