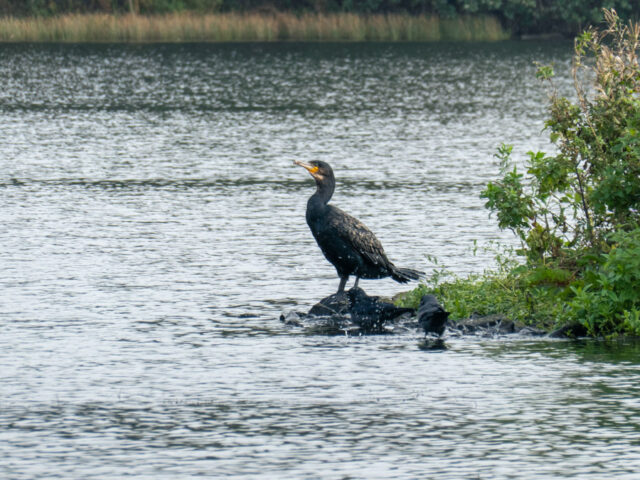 It was such a dull day with the ever-present threat of rain … again.

We were sitting doing nothing all morning when Scamp declared that she was going out for a walk. I was told I could join her if I wanted to, but if not she would go herself. I didn’t see it as a challenge, exactly, but decided I’d tag along for the walk. I’d been yawning most of the morning and needed the exercise. So did my A6000 and my TZ 90 that I’d recently hoovered out to get rid of most of the dust between the elements of the lens. This would be a good chance to see if it had worked.

Broadwood was Scamp’s choice of venue. It’s certainly not mine. It’s just a big manmade pond that had great potential as a watersports venue, but the council refused to fund it, so they left it as it was and by doing so, called it a wildlife area. It does have a path round around it and an extension of the path into the woods is at least slightly more interesting. However, we weren’t going into the woods today because after a few days of rain the paths get flooded and too muddy to walk through without wellies, or better still waders. Today we were just doing the circuit. I did manage to take a few photos, but not too many as the sun never really got its act together and the clouds broke, only to reform again in heavier clumps. PoD was a shot of a cormorant on what used to be called Swan Island, but which is now owned by the cormorants and mallards. It was taken by the TZ90 and seems to be proof that the clean up worked, at least on a dull day. The big test will be when the sun shines. Then the remaining dust spots will show themselves. 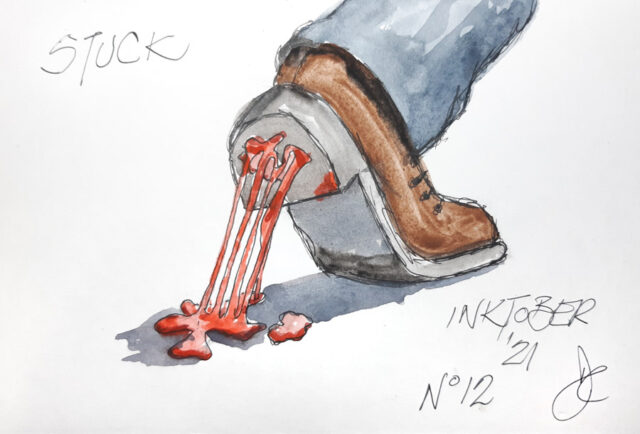 Back home and after lunch the rain that never came was still threatening, and since I had a potential PoD I started processing the photos I’d taken. I also did some research for today’s sketch which was “Stuck”. I’d already decided what it was to be, I just needed a picture to get the angle of the shoe correct. As usual, Google Images came up trumps. Finally I phoned Fred and arranged a meeting for coffee tomorrow morning. We should have been going to Margie’s in the afternoon tomorrow, but she has a trapped nerve in her leg and called off. I understand just how painful that can be now.

Steak and kidney for me for dinner with potatoes and cauliflower. Scamp substituted lentil based veggie mince for steak and kidney and both plates looked remarkably similar.

Tomorrow morning Scamp is booked at Tim Hortons for coffee with Jeanette and I’m hoping to meet Fred at Costa.