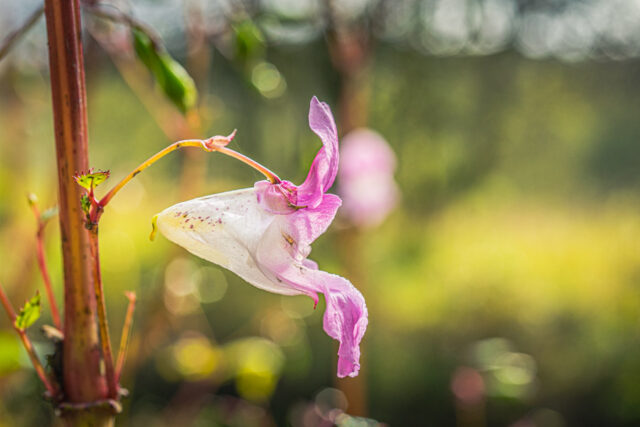 Out fairly early since there was a fair amount of blue sky.

By the time we were actually on the road most of that blue was replaced by grey and an ominous amount of clouds rolling over from the Campsie Fells, but we got parked easily at the Hebo House and walked along the side of the Forth & Clyde canal in the general direction of Twechar. We met hardly anyone along the path. A few cyclists and that was about it. After my lucky spotting of a kingfisher last week with Alex, I was hoping we’d get lucky and see one today, but there were no sightings of that blue flash. We did see one of Mr Grey’s family on the far bank, but he was almost invisible among the reeds.

As we were about to cross the road and head back on the path of the old mineral railway we saw a man with twa dugs. As well as the dugs, he was trailing a long lead and I mean LONG. I’d estimate it to be about nine or ten metres long. He crossed the road and I had visions of the lead getting tangled in a car going in the opposite direction and he with the dogs being dragged along behind it. Unfortunately that never happened. I’m guessing it was a running lead to let the dogs get some exercise, but he really should have been more careful.

We spotted loads of fungi on the way back along the path and I took the opportunity to photograph a few. We also saw a ’workie’ in full workie gear sitting near one of the barriers keeping pedestrians away from the Never-ending Story that is the upgrade of the paths along that stretch. For once there were no notices telling the public (ie, us) what was happening now to these excavations, tree felling, tree planting and general works that seem to have been going on for about three years with little sign of completion any time soon. However we did see one of the mythical workies today. Rarer that a kingfisher.

I got PoD along the path. A pretty little pink flower of the genus Impatiens glandulifera or Himalayan Balsam. It’s a large annual plant native to the Himalayas but is now present across much of the the UK and is considered an invasive species in many areas. I don’t think it does nearly as much harm as the workies and their upgrades. Right, I think I’ve said enough on that subject.

We did manage to complete the walk without getting wet. In fact as soon as we closed the car doors, the first raindrops appeared on the windscreen. Drove home, had lunch and Scamp went out to work in the garden, repotting some flowers and planting new bulbs for next year. Meanwhile I cooked some steak and kidney, some of which will hopefully be my dinner tomorrow. The rest will go in the freezer to be a welcome dinner in the future. 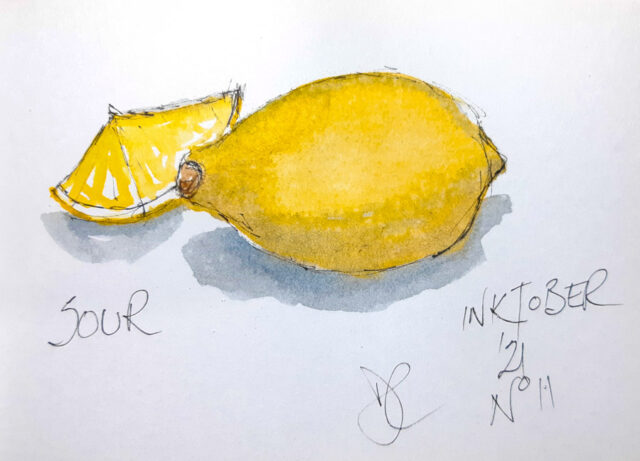 Today’s sketch was to be Sour. I sketched a lemon from the fridge and faked a slice of lemon behind it. Splashed some watercolour on it and that will be another day completed in Inktober. Not the finest painting or sketch I’ve done, but it’s been posted. Inktober is not nearly as full of participants or sketches as it was last year, but then Flickr is much the same.

That was about all we did today. No plans for tomorrow. Weather looks like an improving picture.