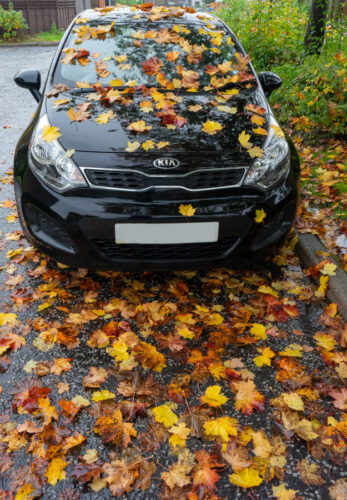 Don’t mistake Jagging for Jogging. Oh no, don’t do that!

We had to be up early today because the lady was coming with the swabs and the iPad that held the questions we have to answer on the Covid survey. She’s been before, in fact I think she was the first Ipsos MORI Market Researcher we met, more than a year ago. We both felt sorry for her having to stand outside in the rain asking all the questions and then trying to security seal the sample bags with sticky tape that wasn’t sticky any more in the rain.

With the survey done for another month, Scamp drove us to Tesco to get the messages. Mostly the usual sensible stuff that we use a lot and we managed to fill the Wee Red Car’s boot with bag after bag of useful sensible stuff. It was raining, of course, and showed no sign of letting up any time soon. When we were driving out of the estate I saw this car sitting under a tree with half the tree’s leaves covering it and decided that if it was still there when we came back I’d go out and photograph it. It was and I did. The photo didn’t need much post processing, it was just one of those ‘found things’ that make you smile. As I was finishing off removing the car’s number plate (on the computer) I noticed it was a Kia and thought wouldn’t it have been nice if it had been a Nissan Leaf!

With the photo done and posted fairly early in the afternoon, I started to make some soup. Today it would be Tomato and Red Pepper soup. I chopped and roasted the tomatoes and peppers then sweated the onion and garlic before adding everything to the pot, pouring in some stock and letting it bubble for half an hour or so. That gave me time to correspond a while with Alex about where and when we’d meet on Wednesday.

It was soon time to blitz the soup and make tonight’s dinner which was Pasta Carbonara and it was fairly good. It didn’t go with the soup, but neither of us paid that any mind.

I’d already agreed with our neighbour, Bobby, that I’d give him a lift to The Link in the town centre for our Covid booster, but when I went for him he said he’d drive because he has his own off-road parking place and parking in our parking area is at a premium after about 5pm. I accepted and then was driven in luxury in his big silver Mercedes. I’d already been warned by my pal, Fred, that there were long queues for the booster jag. He had a 45minute wait in the big converted games hall. He was lucky. We were just over an hour from start to finish, but we both walked away fully boosted and flu jag done at the same time. Ready to face the winter.

The rain was still beating down when we drove home. We rose at about 8am and it was raining. Bobby and I got back just after 8pm and it was still raining. We have had buckets out in the back garden to catch rainwater. They have been filled to the brim for about a week. The birdbath in the garden has been overflowing for weeks. Where is all the rain coming from, and more importantly, where is it all going? 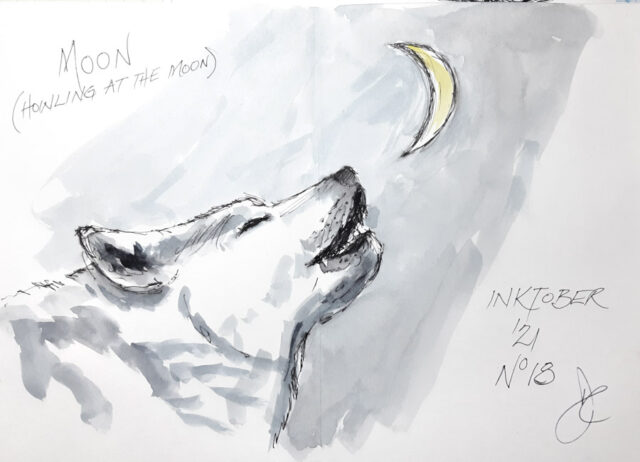 Tonight’s sketch is ‘Moon’. I thought about it long and hard and eventually came up with a rehash of last year’s Wolf. Added a crescent moon for the wolf to howl at and that’s what I’m posting here!

We have no plans for tomorrow, because more rain is predicted!