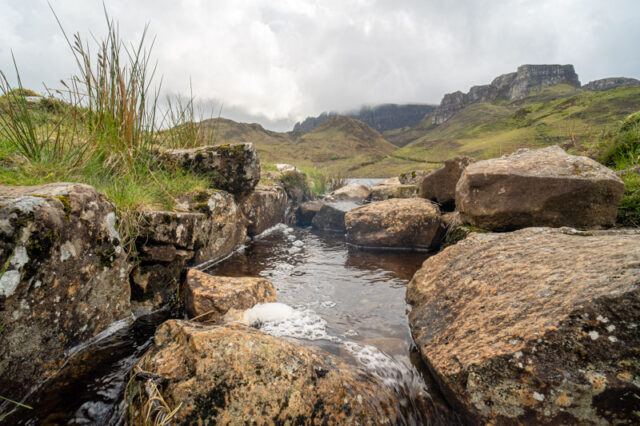 We’d gone out with the intention of driving down to Elgol. That didn’t happen.

We did drive down to the Co-op in Portree for something for tonight’s dinner for us, a couple of litres of milk and a bottle of gin for June. Then we took the road south although it was raining and kept going south into the teeth of a gale and driving rain until I pulled in at a parking place. The place where we’d stopped to photograph the waterfall on Wednesday. There we turned around and drove back to Jan’s Vans for lunch. It was pointless to drive on to Elgol in such weather. Sure, we might have arrived there to wall to wall sunshine. That’s quite possible on Skye. It’s also possible that there would be nowhere to park and the clouds would still be dumping rain on us. No, this was the sensible solution.

After lunch we drove back up the East road to the house. Shared out the messages with June and Ian and had a coffee in our own half of the house. All the while it was raining. But after an hour or so it began to tail off and I thought I might just get out for some photos. That happened when the sun did shine and the clouds did lift.

I drove down to Staffin shore, the beach with lovely light coloured sand. Unfortunately, today you could hardly see the sand, there were so many folk down there. Walking groups, family groups, people with dugs and just ‘folk’. Of course, they ubiquitous Camper Vans were there in their dozens too. Big bloody white boxes with a wheel at each corner. I gave up and drove down to the Slip where there were only two cars and a Manitou digger, forklift, jack of all trades. It looks brand new, so can’t belong to anyone on Skye. I got a few photos, but nothing spectacular. And, of course then the Camper Vans started arriving, so I left.

I drove up past the house, up to Loch Langaig near Flodigarry. It’s a big loch set among a horseshoe of hills. Lovely wee clean burn runs out of it and that’s what I was intending to photograph. I managed a few shots that I quite liked and decided to change lenses. When you’re in the hills, you should keep and eye on the clouds. The direction they’re coming from and how fast they’re moving. If I’d done that I might have noticed they were breaking over the hill tops and I might have got back to the car without getting soaked. I didn’t notice. I did get soaked.

But, I did get the photo. A low level view of the burn running off the loch and that became PoD. Best photographing day I’ve had since we arrived.

It’s unlikely I’ll have very much time for photography tomorrow. Lots of dressing up to do and lots of running around like a headless chicken. Isn’t that what weddings are all about?