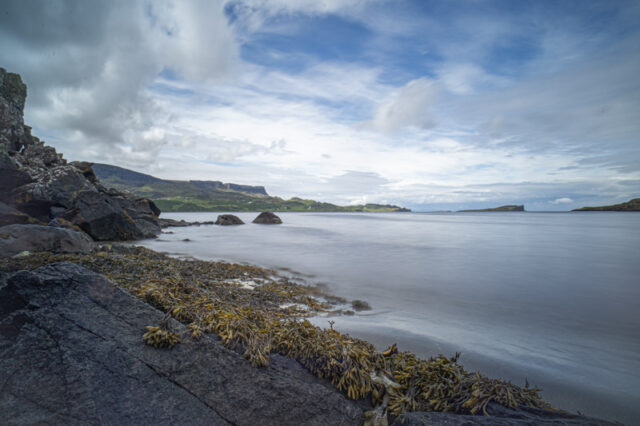 Today we climbed Quiraing. Not mountain climbed it, in the car, of course! Are you mad!

We drove up to see then fantastic new car park and it really was a totally different place from the one we used to know. No big boulders poking out of the hard packed earth. No mad foreigners (that includes english) parking anywhere they felt like it, which sometimes meant actually on the road. No, there is now a purpose built car park with plenty of room for everyone from normal folk to those who drive camper vans. There is a down side, of course. It’s no longer free. That didn’t seem to bother the folk who were filling up all those spaces. We didn’t stop. I’ve photographed the view from the top of Quiraing more times than I care to remember and it in all sorts of weather. No, today we were just being nosey!

We drove on to Uig and stopped at a viewpoint at the top. Just hard packed earth, but free. The whole of Uig bay was laid out below us. I took a few shots that I’d later merge into a panorama or two, then we faced the drop down into Uig proper and the tortuous hairpin in the middle of the drive. Came through unscathed and continued on to Portree. There’s nothing much to see in Uig apart from the ferry terminal to Lewis, or is it Harris? I can never remember.

We were heading to Elgol and its strange eroded rock face at the north end of what is laughingly called a beach. It’s really just a jumble of boulders from ones the size of your fist to massive ones the size of a small car. On a good day there are great views of the Cuillins. But not today. The weather was fine, in fact it was nearly perfect with white clouds in a blue sky, but unfortunately, just before we reached Sligachan, I discovered I’d not brought my walking boots. The thought of climbing over those boulders in my shoes didn’t inspire me, so we stopped and I took a few shots of the Cuillins from the almost diametrically opposite direction. Mountins continuously being covered and uncovered with cloud and with rain showers washing across them. It wasn’t Elgol, but it would do. We turned and drove back to Portree, bought some expensive petrol (£1.71 per litre) and went to Jans Vans for lunch, a hard brush for Scamp and a chilli plant for me.

From there we drove up to Staffin and went down to the beach with its grey/black sand. That’s where today’s PoD came from. It’s a time exposure looking towards Flodigarry, using a 10 stop ND filter. I just knew you wanted to know that Jamie. Scamp hung around for a while, but then went back to sit in the car.

With a few shots in the bag and one I was sure would be PoD, I drove back to the house and we got ready for tonight’s family meal in Columba. There were eight of us being fed on Chicken or Pork or Veggie Haggis with potatoes and broccoli as side dishes. Lots of talk at the table and Scamp was interrogating Allan about the correct way to cook Jackfruit. I was impressed how much information he passed on, explaining the good and bad points of this strange vegetable that we’ve only recently discovered. A good night, even if Mairi wasn’t feeling like joining us.

We drove back to the house because June and Ian had some more preparations before they leave for home tomorrow.

It was a well filled day. Tomorrow we’re hoping to get to Elgol with boots!