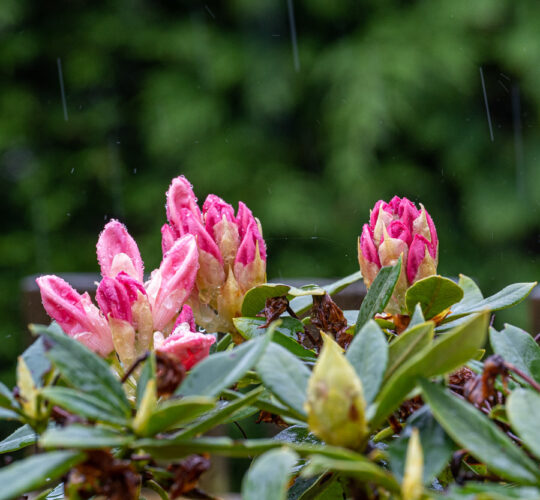 It was one of those days that started wet and just got wetter.

We needed the rain for the garden. We’ve had a few weeks of what can only be called Drought recently. Last week that finally ended when the rain blew in from the west. However now we’ve had enough rain. The buckets are full and the garden is pleasantly refreshed. Even the grass and the woodlands are bursting with fresh green, which is a great sight to see. But you can have too much of a good thing. We need the rain to taper off a bit to let that other natural source of growth stimulation, Sunshine, start doing some good work. Let the sun shine in and let the rain go somewhere else where it will be appreciated.

Lunch was another version of Crimpet™ Thins. Scamp had cheese and beetroot. I had ham, cheese and beetroot. But while Scamp made hers the traditional way, in the toaster, I gave mine a 20 second zap in the microwave first. That gave enough heat to melt the cheese in the bread. More experimentation needed.

Because of that, and the unlikelihood of getting anywhere to take some photos today, I started doing a bit of sketching and painting. I’d really meant to make a start on EDiM (Every Day in May) on Flickr. The main site for it is on Facebook, but after a bit of a bust up with the woman who runs it there, I only post to the Flickr group. However this May is going to be very busy for us and it’s unlikely I’ll be able to complete the 31 daily sketches that are required. So with that in mind, I thought I’d do a couple of quick sketches just to show willing. They didn’t turn out very well, but it was fun trying.

While I was engrossed in my paint splashes, Scamp was doing the opposite, she was cleaning and tidying the bathroom. Like she says, it needed done and today was, if not the best day to do it, at least a better use of a dull, wet day. I know I should have helped out, but it’s a small bath room, too small for two people to work in without really getting in each other’s way. I left her to it and made dinner. Monday dinner is almost always Italian in flavour. Today it was Red Pasta. The pasta in the cupboard (today it was mixed) with a tomato based ragu containing shallots and red peppers chopped fine. It was deemed ok! Foodies! We love to discuss and critique everything we eat.

Eventually I gave in and grabbed a camera and ventured into the garden to get some photos of the rhododendron bush that’s nearly flowering … in the rain. That’s what gets photogs a bad name.

Tomorrow we may go looking for a pair of brogues for me. No mention of another dress for Scamp. That doesn’t mean something won’t catch her eye, but I never said that.