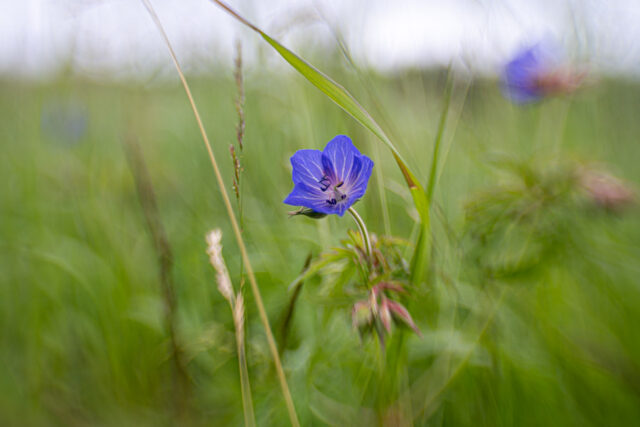 After a cup of coffee each, Scamp announced that she was going to the shops to get something for lunch, but before that she suggested Kedgeree for dinner. That suited me and I got a slab of smoked haddock out of the freezer. It was just warm enough to walk to the shops wearing shorts. I thought I’d made the wrong decision at first, but when you’re walking you don’t notice the cool breeze so much.

We walked back and made some lunch. Mine was roast ham, lettuce, baby tomatoes and sweet peppers in a wrap. Scamp had a tomato sandwich. After lunch, Scamp went out to work in the garden. I’d done some gardening yesterday, so that was my work done for the week. Instead, I took the Sony with a short macro lens and a Lensbaby for a walk in St Mo’s. Saw a sneaky spider on a grass flower waiting to ambush any unsuspecting insects and used the Lensbaby to photograph some wild Geraniums bobbing around on the breeze. The geraniums got PoD.

Back home I did a bit of painting, well it was more a case of just slapping some paint on a sketch I did last week. The paint improved the sketch, but then again, covering it in a coat of Crown gloss would have improved it too, in my opinion. I wasn’t impressed.

Tonight’s dinner was Kedgeree which is one of Scamp’s specialities. Spicy but not too hot and lots of lovely smoked haddock in it to give that salty taste to the rice. All topped off with an egg that was just runny and no more. Lovely meal.

Watched another Sewing Bee tonight, but I think it was last week’s episode. I won’t say who left tonight just in case any of my readers haven’t watched it yet. I’d intended watching the first episode of Slough House tonight on Apple TV+ after I signed up to Apple for at least a month. I’d just finished Mick Herron’s latest book, Bad Actors. In the epilogue he explains all the shenanigans that went into making the film for Apple.

Tomorrow we’re booked for coffee with Isobel and after that a visit to Calders is on the cards to find a circular metal support to carry the weight of the flowers on Scamp’s latest rose – Lady of Shalott.