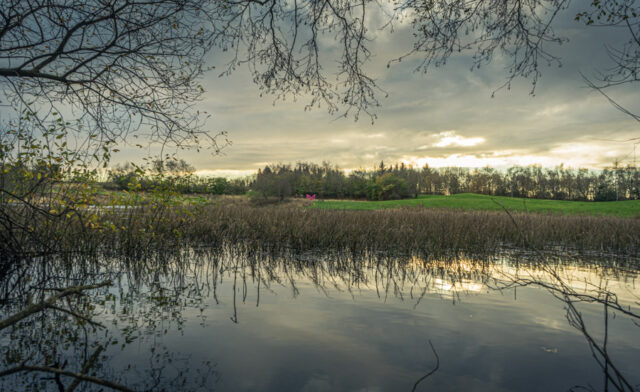 A wild lady is Arwen.

Named after the Lady of Rivendell, Arwen is a storm that started battering the east of the UK this afternoon. I’d gone out in the early afternoon before she could swoop over us and it was bitter cold just about 4ºc which with windchill reduced to approximately -267ºc or thereabouts. At least that’s how it felt. However, I did get some photos and my favourite was the one you see above. It’s the pond at St Mo’s with Deone’s butterfly seat in the distance.

One circuit of the pond was enough for me today. The wind was beginning to rise as I was coming home and I was glad I’d my Bergy jacket with its fleece lining to keep out the worst of the weather.

Earlier, in the morning I’d washed the downstairs windows, but that only gave Scamp the opportunity to change the curtains. I did the taking down of the curtains, Scamp did the changeover and then I put the new ones up. Yes, she was right, they did need changing.

Earlier still, we spoke to Hazy and found what was happening down Epsom way. Lots of interesting things going on down there and we now have a singing school teacher in the family!

All that and a phone call from Margie to tell Scamp about her trips to hospital and the swearing from some Larky folk who were in the ward with her. I’d could have told her, that’s not swearing, it’s just the way they talk. The sweary words are just used as punctuation!

Storm Arwen has been making a nuisance of itself for some time now, since about 3pm, and is still roaming around the houses here.  It’s been gathering all the leaves from around the estate and dumping them on our front garden, then clattering them off our front window.  The storm doesn’t seem to be lessening  and it will be here for most of the night and some of tomorrow it seems. I don’t know how much sleep we’ll get, but it will soon be time to find out.

Tomorrow I’m intending cooking a roast chicken for dinner. I’m sure I’ll need some assistance from Scamp, but maybe not too much. I don’t think we’ll be going far until Arwen heads off south.