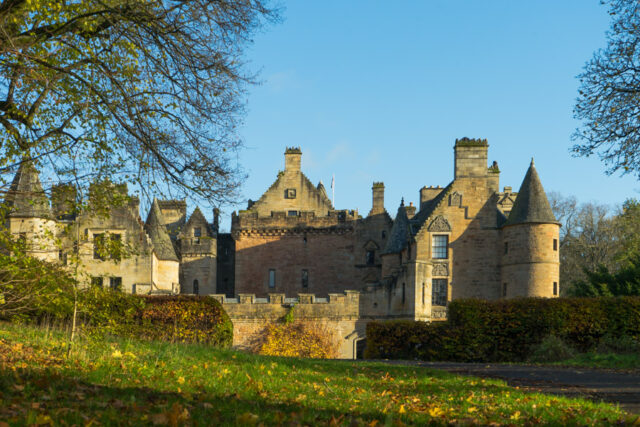 Out photographing with Alex.

I’d watched the weather predictions for this week and Tuesday looked like the best day. Alex and I agreed that we’d go and walk round Baron’s Haugh which is another name for the Dalzell estate on the outskirts of Motherwell. It dates from around 840 when it was a Royal Hunting Forest. Today it’s a maze of roads and paths with lots of odd buildings dotted around the grounds. We walked round the south side of the park, taking the path between the wildlife pond and the River Clyde. Lots of evidence of flooding with the path having been swept away recently.

After we reached the end of the path and after Alex had consulted his Photographer’s Ephemeris app, he decided that the light would be just right for some decent photos of the Big Hoose, Dalzell House. On the way we passed the Japanese garden and made a mental not to go back and photograph the Japanese maples there after we’d photographed the house. We did get a few shots of the house, trying for the best angle to capture the light on the building, but lose the cars in the carpark. We were just finishing when a bloke came out of one of the cars with a tall monopod with what looked like a GoPro on top. It was a telescopic monopod, as most of them are, but this one extended to about 15m! Although there was very little breeze today, there was enough to cause a bit of a sway at the top. He seemed to be using a phone to control the camera. I hoped he had set a fast shutter!

We walked on because the best of the light had left the building and we walked back to the Japanese garden. Talked to one of the gardners who was sweeping up those red maple leaves. It turned out he was in charge of a group of volunteers who were cleaning up the garden and the burn that runs through it. He was happy for us to photograph the trees gave us free rein to take photos.

By the time we had finished there and said goodbye to the gardener, the light was definitely on the way to the horizon and it was time to go. Dropped Alex off at his house and drove home with really dark clouds ahead of me and the prospect of rain that didn’t appear.

While I was out with Alex, Scamp was out for coffee with Shona so she could hand over our house warming present. Yes, Jamie, it was towels!

Dinner tonight was Scampi chips and tomatoes. Scampi, which was baked in the oven, we agreed was just ok. Not sure we’d have it again.

PoD was one of the views of the Big Hoose after some delicate Lightroom work to remove offending cars.

Tomorrow looks a bit like today as far as the weather is concerned. Perhaps not quite as much sunshine.