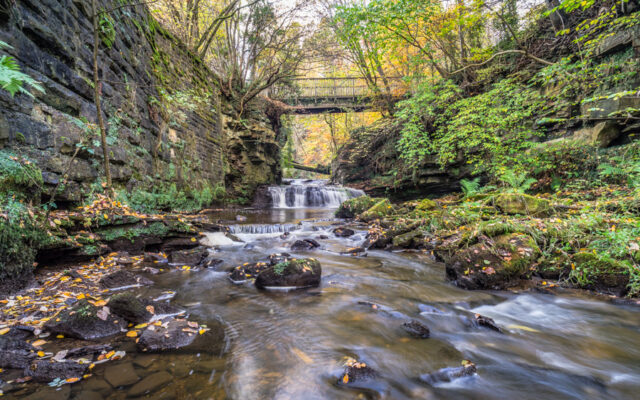 Another optician. Another appointment.

We drove to Larkhall to our usual optician to get his opinion on the state of Scamp’s eyes. He came to the conclusion that she has two cataracts, one requiring immediate attention and he will probably have contacted the hospital today after we left. Also, what Scamp was told yesterday was true, she will have to forego the use of contact lenses for four weeks beginning from now. This will be a great hardship for her as you can imagine, but the benefits will outweigh the sacrifice. I don’t think those were her exact words, but by the end of the day that was the gist of her thinking!

Because of the Covid restrictions still in place, I couldn’t be with her at the opticians, so I’d come prepared with camera, tripod, ND filters and their adapters. I drove down to Millheugh which is the area of Larkhall that runs along the Avon Water, but it wasn’t the Avon I was intending to photograph. I knew I had roughly an hour to get what I wanted and get home.

First stop was the salmon ladder on the river with a torrent of water flowing down and over it. It looks as if one of the granite bricks from its wall has come adrift in the spate. It’s not been a very lucky addition to the river. I got a few shots, but standing on a bridge with no pavement and cars whizzing past your tail isn’t a comfortable place to take photos, so I grabbed a few and moved on.

I found the Powforth Burn and followed it up to the bridge, now called the Powforth Bridge, but my mum always called it the Cauve’s Know, (pronounced cawves now) and my Uncle Sandy knew it as the Cloves Mill. I didn’t cross the bridge, but took a path that followed the line of the burn to a dam. To the side of the dam there used to be a deep dark pool that held the water that came from the dam. Apparently there used to be a small mill there many years ago, but I don’t remember it. Maybe that’s where Uncle Sandy’s name for the bridge came from. I took some photos of the dam and the water cascading down its face. I used to fish here in the summer evenings back in the ‘60s. Never caught much, but it was a peaceful place to be. Not so pretty today because the sun was already too low to light it properly. I think I’d need to be there in the morning to get the best light.

Walked back down the road and found a way to scramble down the steep banking to the burn and set up the tripod again with a much better view than the dam. Just looking upstream under the bridge to the highlighted trees beyond. This was the shot I wanted. I took two lots, one with the 28-70mm lens and one with the 18mm. The 18mm won, but only after a fair bit of heart searching and an hour or so of post processing. Got the phone call from Scamp to say she’d meet me at the Co-op. Time up for me. Walked back to the car, passing the Applebank pub, allegedly haunted, where I saw what looked like a skeleton wearing a monk’s habit, looking out of an upstairs window. I didn’t photograph it, nor did I look back. I didn’t want to see an empty window!

Picked up Scamp and we drove home. Discussing the whys and wherefores of the afternoon visit to the optician. He has agreed that she needs new glasses to wear in place of the contacts and he says they will be available as soon as possible. There was still a bit of ranting today, but I let it be. She has been a listening post for me, many times. Now it’s my turn to return the favour.

I went looking for a tablet, a 7” or 8” one to use as a Kindle reader, but not an Amazon Fire. I wanted an Android one. Stopped at Currys in Coatbridge to have a look at the options, but couldn’t decide on one. Came home empty handed.

That was about it for the day. Home made Chicken Tikka Masala from Spice Taylor for dinner was voted just ok.

The view of the bridge and the Powforth Burn won PoD.

Tomorrow we’re out early for a hopefully relaxing dancing lesson.