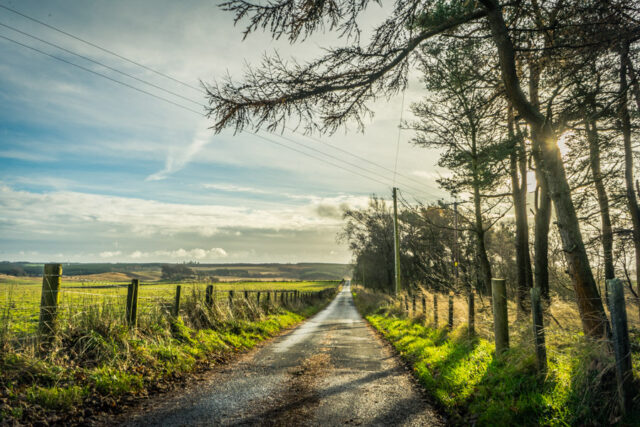 Always a good recommendation, but rarely operated on.

Today Scamp was entertaining Annette to tea at our house in the morning. I waited until she arrived then I went out for a walk in the morning sunshine, just like I’d told myself to do. I took the Sony A7 and drove up to Fannyside Moor where I parked beside the Scots Pines that sound so good with the wind whistling through them. It was a lovely morning and the sun was shining, but the west wind was cold. I knew the wind would be colder and stronger later in the week when it swung to the north. They do say that “The west wind doth blow and we shall have snow”. It appears that may be true before the weekend, but I get ahead of myself.

Today I was looking for some decent landscapes and Fannyside is great with its view to the south and east. I started out walking in that direction with a bit of shelter from that west wind because of the trees on my right. I couldn’t find very much to photograph until I reached a stand of trees silhouetted against a wild looking sky. That might be PoD, I thought. As I turned to head back up the hill I could hear a motorbike engine behind me. It turned out to be a quad bike. The farmer out to feed his sheep. Soon the sound of the engine was drowned out by the barking of two sheepdogs trying to run me down. A couple of shouts from the farmer brought them to heel and I continued on unharmed.

I didn’t get much else there and drove to Greenfaulds station car park where I left the car and walked along the Luggie Water for a bit. Although it is only November, the snowdrops are pushing their green shoots up under the trees. Some good lighting encouraged me to shoot some more frames and one of those shots almost made PoD. Also saw some good graffiti under the road bridge. Hardly met anyone along the path.

Back home, Annette was just leaving and after saying goodbye, we made instant pizza our lunch. The weather was still bright, so Scamp and I went for a walk over to St Mo’s. Just one circuit of the pond today because it was getting colder than in the middle of the day. Scamp got a surprise delivery of neoprene elasticated specs holders from Mr Amazon today. She says they work well, but seem to put extra stress on the already flimsy legs of the glasses. They survived the trip to St Mo’s.

Dinner tonight was Giant Fish Fingers and Spaghetti (the tinned variety). It’s quick to make and it tastes good. Plus it fulfils the rule of Fish on a Wednesday. That’s been a tradition in our family for years.

Watched the final episode of Shetland tonight. It did answer all the questions, but then started a new story that won’t resolve itself until the new series, NEXT YEAR! What will we watch until then??

In the end, neither of my initial shots made PoD, it was a landscape from Fannyside that won, looking down the road the disappears into the distance. No sign of sheepdogs or quad bikes!

Tomorrow looks cold and windy with the chance of Wintry Showers. Turn the heating up, I say.