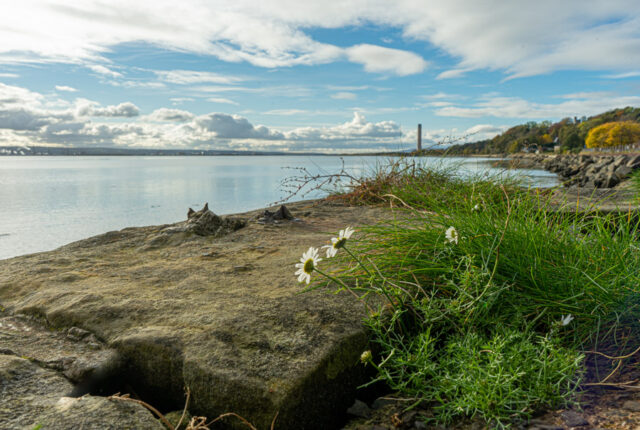 It was a cold day, but a clear one with blue sky and sunshine. A great surprise and a day we wouldn’t waste.

Scamp suggested three places we might go today. Either Culross, Dunfermline or Kirkcaldy. I had a few things to do on the computer first, but after that we could go. We decided that we were a bit late to go to Kirkcaldy, and I settled on Dunfermline, with the possibility of visiting Culross on the way back. Scamp agreed.

On the way there, we again met a cavalcade coming in the opposite direction. Fewer this time, but still with that ’do not get in our way’ attitude. Our drive went well until we were on the outskirts of Dunfermline and got stopped at a set of temporary traffic lights. Temperamental traffic lights with their own sequence of operations:

Red, Amber, All Off, Green. At this point, I started to move forward, but couldn’t see the road ahead for a traffic sign in front of me. Luckily Scamp could see and told me to stop because there was traffic coming towards us on the single open lane. The lights were still on Green for us, but still the traffic flowed past us coming in the other direction. Finally the lights changed to Red, Green, Amber and Red again, but the traffic coming the other way just kept coming. Eventually there was lull in the flow and a works lorry came out of our line and drove part way down the road before cutting in to the closed lane. I was right behind him and then everyone else followed me. We got through unscathed. It was a most bizarre situation and could have been really dangerous. I’ve saved the dash cam footage just in case some jobsworth decides I had run a red light. Maybe it’s a special light sequence for COP26, who knows. 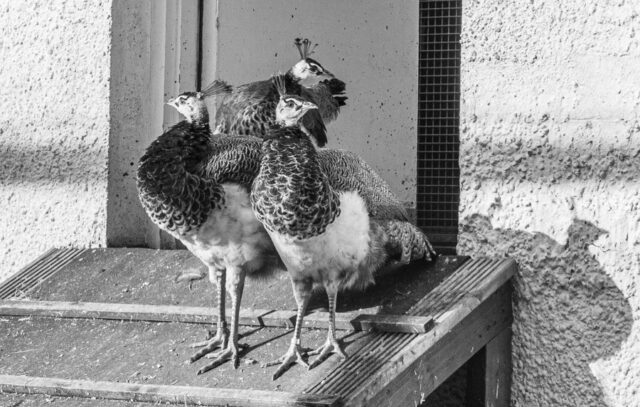 We got parked easily at Pittencrief Park in Dunfermline and went for a walk in the autumn sunshine. We walked down to see the peacocks. There was only one male strutting around, but the colours in his tail feathers was incredible, sparkling in the sunshine. Three or four peahens came out to see us too. Their plumage is much duller than the show-offy peacocks, but I did get one shot I liked, this one

We walked round the formal gardens of the park and I got a few shots, but when I got them home they were disappointing, just not as crisp as usual, Scamp said that and I think she’s right. Mostly they were shot at around f16 which isn’t recommended. I must have twiddled the dial accidentally when the camera was in my pocket. That’s the only thing I can think of.

We had coffee in the posh new extension to the park pavilion. Coffee wasn’t all that posh. Mine was meant to be a cappuccino, but it looked like Scamp’s latte with some chocolate sprinkled on top. No foam and not much coffee either. However, the scones were lovely and fresh.
I did hear an interesting conversation there. An American bloke said to one of the servers “What is Coronation Chicken.” Her reply was “It chicken with a Coronation Sauce.” Well, that cleared it up nicely! He chose a chicken salad instead. I would have too.

We decided to take the longer, but safer route home via Culross. It was lovely just sitting watching the water and the light changing on the far shore. I took some shots from the start of the pier, and it was there I found the settings error. Fixed it and everything settled down after that. PoD was a shot taken there with some daisy-like flowers on the pier wall. I think now they were Chamomile.  Sorry Hazy, I hope that Culro$$ word doesn’t give you nightmares!

Drove home and decided I had enough time to wash both cars before the rain came on. As it turned out I had plenty of time, because the rain held off all afternoon. They look a lot better now, although I think I might take Scamp’s wee red car through the carwash next time.