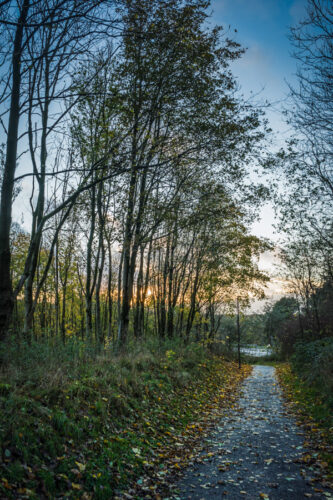 Driving to Bridge of Weir at early o’clock in the rain.

The teachers wanted an early start today. Half an hour early to be more precise. I wasn’t too bothered until I realised I had about fifteen minutes to shower, shave and get dressed. I managed it … just! It was a really mucky morning. High winds, lashing rain and when we headed down the street the automatic headlights came on. It was going to be one of those days.

Despite the weather and threats of disruption on the motorway because of COP26, we made good time to the dance class and the room filled up quickly with far more dancers than usual. The teachers had decided that today was a reprise of all we’d learned so far. The only one we really screwed up on was the quickstep. The rest we fumbled our way through, but the quickstep wasn’t quick and most of my steps were in the wrong place. I don’t know if I will ever be able to be totally confident with that dance.
Sometimes, for me, the time drags in class, especially if I’m having problems with a dance, but today the time flew in. However, our lack of practise time in the past fortnight was showing. We need more time on the floor, especially if Scamp is going to be out of class for a month. We might ask the teachers for a private lesson or two to keep us up to date.

The drive back is usually a painful stop and go for about five or six miles as we near Glasgow, but today, perhaps because of the weather or the threat of disruption, it all went remarkably smoothly. In fact we took almost the same time for the return journey as for the outward one in the morning. That won’t happen every day.

There was more light as we left Glasgow and headed for Cumbersheugh and I was beginning to get hopeful that I might get out to take some photos, but the brightness was short lived and we were back in the land of gloom, wind and rain.

After lunch Scamp made some weird sounding Curried Kale soup which we have yet to taste, because it’s intended for Sunday’s starter, but which looks interesting. I took a walk down to the shops in the late afternoon to get a chicken for tonight’s dinner. We also needed potatoes, so that was a heavy bag to lug home. Additionally I took a long way home, hoping to get something worthwhile out of the day because the sky was brightening and the rain had stopped. PoD became A Road Less Travelled a gloomy path through trees heading towards an underpass. Nice bit of gloaming light through the trees warmed it up a bit. Just as I was heading down the path a workie said those worrying words “Were you my techy teacher?” I couldn’t deny it, he obviously knew me. He was great big towering bloke who I remember as a quiet wee pupil. He didn’t have a busy beard then either. Sometimes it’s good to meet FPs, especially when they speak to you. Not so when they shout your name across the street!

Tomorrow looks a bit like today, but hopefully with less liquid falling from the sky. We might get out for a walk.